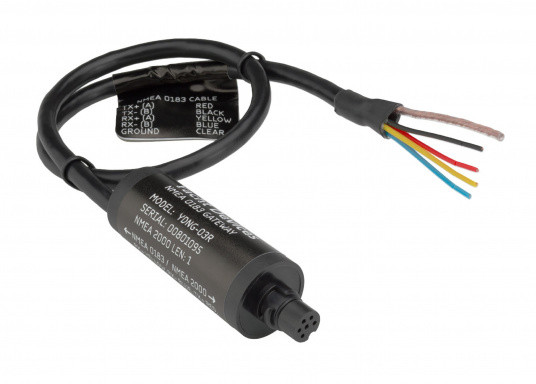 This bi-directional converter allows you to easily connect your NMEA0183 devices to your SeaTalkNG network and vice versa. Support for many data outputs, such as: AIS, waypoints, routes and autopilot.
Available variants:

SeaTalk NG T-piece
Show product
only €24.33
more than 100 in stock
This bi-directional converter allows you to easily connect your NMEA0183 devices to your SeaTalkNG network and vice versa. Support for many data outputs, such as: AIS, waypoints, routes and autopilot.

This bi-directional converter allows you to easily connect your NMEA0183 devices to your SeaTalkNG network and vice versa. Support for many data outputs, such as: AIS, waypoints, routes and autopilot.
Baud rate is configurable from 300 to 115,200 baud for NMEA0183 connection and also allows you to easily use AIS transponders (38,400 baud) and PC adapters, in addition to the standard NMEA0183 devices. The default baud rate is 4,800 Baud. It is not possible to define a separate baud rate for the input or output, the defined baud rate is set for the input & output in parallel.

The device can be configured and firmware updates downloaded using a microSD card slot. No special software is needed for this! Only a device (laptop, PC, smartphone), a microSD card (not included) and a text editor are required.

During configuration, you can, for example, change the baud rate for AIS data to 38,400, 9,600 baud for Navtex data or for faster data transmission to up to 115,200 baud. Filters can also be set to block data sets that should not be rendered. There is a blacklist (block before rendering) and a whitelist function (only render these data sets).

Instructions for changing the baud rate:

Simon P. answered
on Jul 18, 2021
The PDF manual I downloaded says this: "During normal operation, Device produces a series of five flashes every five seconds. The Flashes indicate the state of Device interfaces over the last five seconds and have the following meaning: • Flash #1. GREEN if data is received from the NMEA 2000 interface, otherwise RED. Note that filters and other Device settings do not effect this signal. RED usually indicates problems at the level of the physical connection. • Flash #2. GREEN if data transmitted to NMEA 2000. This signal may be RED if nothing was received from NMEA 0183, or conversion was prohibited by the filter settings (see Section VI). • Flash #3. GREEN if data was received from NMEA 0183 interface. A RED signal may indicate the incorrect speed of the NMEA 0183 port or problems with the physical connection. • Flash #4. GREEN if data was transmitted to NMEA 0183. As there is no confirmation of reception, this signal does not mean that data was received by any listener. RED means that Gateway has nothing to send, because nothing was received from NMEA 2000 or conversion is prohibited by filters (see Section VI). • Flash #5. GREEN if no checksum error found in incoming NMEA 0183 messages (only messages not blocked by filters are verified). This signal is also GREEN when nothing is received from NMEA 0183 at all." Hope this helps...
To top
<script type="text/javascript"> /* <![CDATA[ */ var google_tag_params = {"ecomm_prodid":90292,"ecomm_totalvalue":189.95,"ecomm_pagetype":"product"}; var google_conversion_id = 1071922788; var google_custom_params = window.google_tag_params; var google_remarketing_only = true; /* ]]> */ </script> <script type="text/javascript" src="//www.googleadservices.com/pagead/conversion.js"></script> <noscript> <div style="display:inline;"> <img height="1" width="1" style="border-style:none;" alt="" src="{{ assets_url }}//googleads.g.doubleclick.net/pagead/viewthroughconversion/1071922788/?value=0&amp;guid=ON&amp;script=0"/> </div> </noscript>