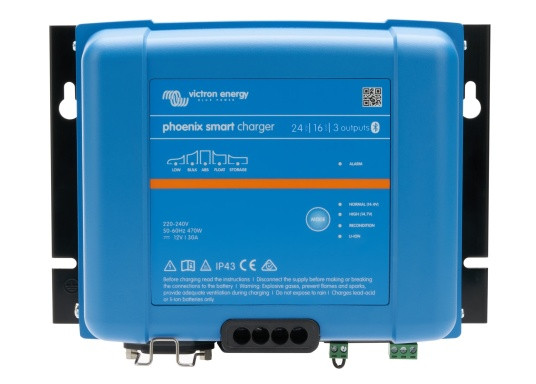 The Phoenix Smart IP43 is a powerful charger that can power up to three battery banks. It can be monitored and operated using an app via Bluetooth. This high-tech battery charger is suitable for almost every type of battery. Also for lithium-ion batteries (LiFePO4). Charging ports: 3.
Available variants:

AC Power Cord for Smart IP43 / Phoenix Chargers
Show product
only €9.20
16 in stock
The Phoenix Smart IP43 is a powerful charger that can power up to three battery banks. It can be monitored and operated using an app via Bluetooth. This high-tech battery charger is suitable for almost every type of battery. Also for lithium-ion batteries (LiFePO4). Charging ports: 3.

VICTRON's Phoenix Smart IP43 is a powerful and intelligent battery charger and features an adaptive 5-step charging system for up to three battery banks. Each power output delivers the full charging current and the charger can be monitored and operated via an app using Bluetooth. This high-tech battery charger is suitable for almost every type of battery. Also for lithium-ion batteries (LiFePO4).

Note:
The charger is supplied without an AC connection cable. This must be ordered separately "VICTRON AC power cable 2 metres / itm.: 41330"

Bluetooth
The charger can be controlled via Bluetooth from a smartphone, tablet or laptop. The device also features a VE.Direct port and programmable relay. Smart Battery Sense can also be connected to control the battery temperature compensation. The Phoenix Smart Charger IP43 is a universally usable high-tech battery charger thanks to its well-known five-step charge algorithm and the ability to programme your own charge algorithm.

Charge algorithm
Phoenix Smart features an adaptive 5-step charge algorithm. Adaptive means that the charge process is automatically optimised to the way the battery is being used. In addition to the standard three charging levels (bulk, absorption and float), the Phoenix Smart offers a fourth and fifth level: storage and recondition. Following a deep discharge, the absorption time is increased automatically to ensure that the battery is fully charged. When the battery has not been discharged for 24 hours, Storage Mode kicks in.

Long life
To protect the batteries in the best possible way, Phoenix Smart has various features such as BatterySafe mode, which prevents excessive gassing, a temperature sensor, which limits the rate of voltage increase as the battery temperature rises, or a voltage sensor to compensate for voltage losses due to cable resistance, so that the battery always receives the correct charging current.

Battery types
The Phoenix Smart charger is controlled by microprocessors that adjust to almost any type of battery. Suitable for lead-acid, AGM, gel and lithium-ion batteries.

Simple system with DC consumers only
The battery charger charges the battery and at the same time serves as a power supplier for the connected devices. 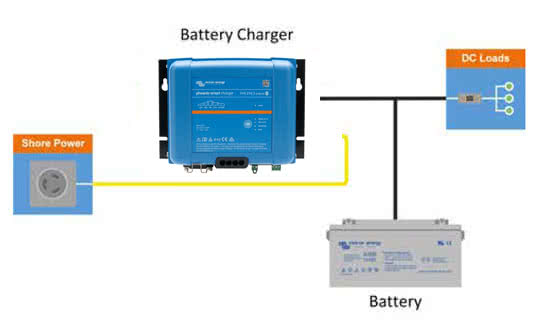 System with inverter
To ensure the supply of the 230 V AC source at all times, this system includes an inverter. For chargers with 3 outputs, several battery groups can be charged separately.