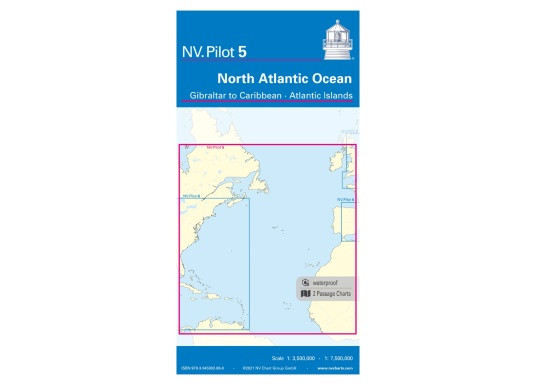 The front side displays the the east coast of the Atlantic Ocean from La Coruna to the Canary Islands, plus the Azores at a scale of 1:3.5 million. On the back the whole North Atlantic from 10° to 53.5° north, including the Caribbean Sea, the Arc of Antilles, the east coast of North America to Newfoundland, and the Atlantic coast of Europe and Africa from Ireland to Sierra Leone is shown at a scale of 1:1.75 million. Both contain the North Atlantic currents. In addition, the maps are marked with direction and strength. This is supplemented by explanations.
The beacons and approach ports necessary for a passage planning, the routes including the distances and the connections are marked as large circles.
The map is in DIN A1 format and folding dimensions are approx. 15 x 30 cm.

NV VERLAG Passage Chart 6 US East Coast - Maine to the Caribbean, Bermuda
only €23 36
No rating yet
7 left in stock

NV VERLAG Passage Chart 6 US East Coast - Maine to the Caribbean, Bermuda
only €23 36
No rating yet
7 left in stock