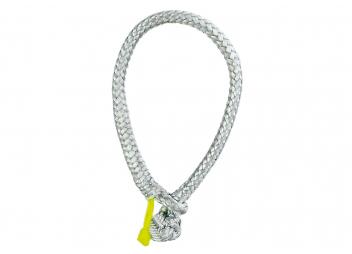 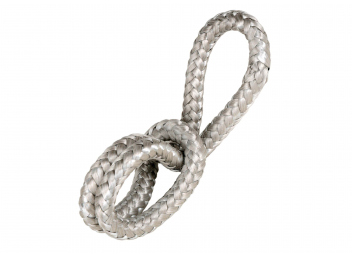 „The product is just as expected.“ 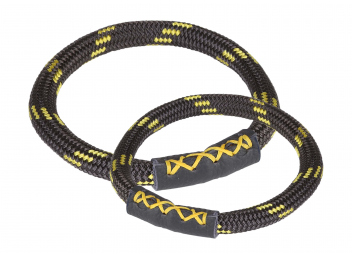 „The product is just as expected.“

Soft rope shackles for sailing are becoming more and more popular. But what are the advantages of these types of sailboat shackle? Read on to find answers to the most important questions and plenty of helpful tips! Marine soft shackles have a number of advantages. They're cheap, flexible to wrap around most pulling points, weigh only a fraction of their metal cousins and with a little know-how are easy to be made - in short, they have revolutionised the rigging hardware on board sailing boats and sportsboats. Want to buy a soft shackle? In our online shop you will find a large selection from brands such as Gleistein, Seatec and Antal. Learn more about Soft Shackles...

What are soft shackles used for?

With the arrival of high-strength, high-tech lines, so-called Dyneema soft shackles or rope shackles have emerged as the shackle of choice in the leisure boating sector. To make a soft shackle for sailing, an eye is spliced at one end of a short piece of rope and a stopper knot (diamond) is tied to the other end. These strong, lightweight rope shackles (also called soft shackles or loop shackles) are often used on the rig to attach the ends of jib sheets to clew rings and thus avoid having metal parts flapping around in the wind for increased safety.

For sailing, many variations have been developed over the years for different areas of application. They are not only used in yachting but also in climbing and as heavy-duty shackles in offshore and off-road applications.

What is Dyneema? Dyneema ropes consist of a synthetic, polyethylene-based chemical fibre with ultra-high molecular weight, also called PE-UHMW fibre (Ultra-High-Molecular-Weight Polyethylene) This fibre first came onto the market in the 1980s and has subsequently been further developed several times.

What are the advantages of soft shackles?

Rope shackles are very flexible and their soft material doesn't scratch or damage things like the deck or other surfaces on board. Unlike metal shackles, they float, are easy to attach in hard-to-reach places, and can easily be opened and re-attached even after extreme loading. They are also very strong:

With a material diameter of only 3 mm, this type of shackle has a breaking load of up to 500 kilograms, with a working load of 250 kilograms. So-called heavy duty shackles are not only used in offshore sailing, they're also found in the off-road sector and are used by overland travellers with their vehicles and equipment. With a diameter of 10 mm, they have a breaking load of twelve tonnes.

Allas, despite all this praise, there are also some disadvantages of soft shackles: one such is that they cannot be opened under load. Also, braided rope is not exactly 100% resistant to abrasion and can be easily damaged by sharp edges - they will therefore always need to be checked for damage and, if necessary, replaced more often than metal shackles. This is why it's common for some heavy-duty rope shackles for off-road use to be covered with an additional protective cover.

- Highly versatile use on board -

If used with low-friction rings or other hardware, soft shackles can also be used to replace blocks, as barber haulers to trim the headsail or for temporary outer sheet hauling points. As a low-weight alternative to their metal cousins, rope shackles are especially useful in regatta sailing where every gram of weight saved counts. Some manufacturers offer blocks especially for the yachting sector, where Dyneema loops replace the classic metal connections. Ideal for attaching the jib sheet.

As a connection between the clew on the headsail and the sheet (spliced eye needed), a rope shackle is less likely to snag the baby stay than, say, a knot or metal shackle. Their light weight also means that they are popular for use on spinnaker boom sheets and halyards, for example. The working load of halyards and genoa sheets can be easily calculated using the sail area:

Multiply the sail area in square metres by 30 (for spinnakers 13). A shackle will break if the specified breaking load is exceeded. The safe working load is usually estimated at around 40 percent of the breaking load of the shackle.

Dyneema-compatiable products can also be found in our online shop, such as metal shackles (shackles made of brass, titanium or steel), friction rings, stand-up blocks, where you can also find pre-spliced sheets and halyards.