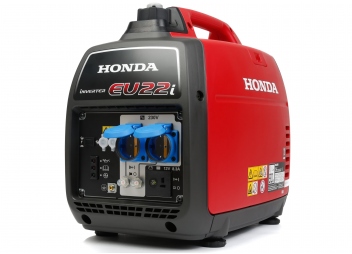 „Super fast delivery to our temporary marina in Italy! Honda is Honda, top of the line generator. Replaces our unreliable Kipor.“ 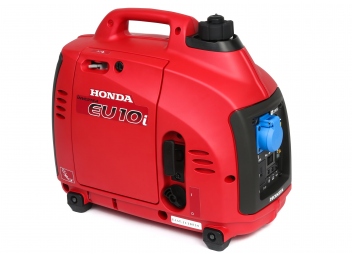 „Very good pricevalue. Super careful and fast service delivering to my address. I still need to run it and verify performance, noise and consumption. Will connect in the coming week but as a Honda should be as stated.“

NEW
Choosing the right portable generator is no easy task. Whichever generator you decide to buy, you want to be sure it's the right choice from the start and has a quality you can rely on. Be certain that your generator won't let you down on your travels and choose from SVB's range of generators that feature the most up-to-date technology and utmost efficiency. Learn more about Generators...

What size generator do I need for my boat?

- Enjoy portable power on board -

A medium-size generator should be enough to handle all your power requirements on board. Such generators weigh up to 27 kgs and are designed so that they can be lifted with one hand. Most models that are for recreational use have a maximum output of around 3200 watts, and should be more than enough to cover your boat's power needs. Smartphones, lights, coolers, or electric grills; you can power them all with one of these generators. A reliable marine genset can make an outdoor lifestyle so much more comfortable. Don't forget, you can also use these kinds of generators on land too. They're also great for taking with you when you go camping.

- Old tech has never been so green -

Instead of operating the engine at full power all the time to meet demand, an inverter generator electronically throttles the engine up and down. This boosts efficiency, meaning that the tank will not need to be filled up as often. We can all be grateful for that. Inverter power generators also produce fewer emissions and are generally much quieter than conventional generators. So you won't have to worry about disturbing people around your boat if the shore power goes down! It never hurts to ask, though, just in case ;-) Important steps have also been taken in terms of safety. Find out more about that in the next section.

What safety precautions should be considered when using an inverter generator?

To reduce the risk of carbon monoxide poisoning, modern generators have a built-in sensor that triggers an automatic shutdown if the CO2 concentration in an enclosed space reaches dangerous levels. All of our generators also feature the latest technology that greatly reduces CO2 emissions.

Nevertheless, always take care never to use your generator in the cabin or confined spaces, especially closed rooms.

One of the most important aspects of safely operating any power generator is choosing one that can provide the right wattage to run all major appliances. Otherwise, there is a risk of overloading the generator, which can happen with an inverter or a portable generator if you' re not careful. Overloading occurs when too many units are connected and the total wattage supported by the unit is exceeded.

How do mobile generators work?

In order to explain how an inverter generator works, let's first look at how all generators produce electricity in general. Power generators consist of two main parts - an engine and an alternator. The engine consumes fuel, e.g. petrol or diesel and drives a shaft. The alternator consists of two main components - the rotor and the stator. The rotor is a shaft that rotates, driven by the energy supplied by the engine, to induce an electrical current. This current goes to the sockets where it can be used to power any device.

With a conventional generator, the energy produced by the alternator is (more or less) supplied directly to the socket. It may pass through a voltage regulator or other protection devices, but the current is not necessarily "cleaned up". Therefore, the power generated by a conventional generator has a higher THD (total harmonic distortion) than the power generated by an inverter generator. THD is a way to gauge power supply quality.

An inverter generator works differently. The alternating current (AC) generated by the alternator is transferred to a rectifier, which converts the alternating current into direct current (DC). This direct current is then converted back into alternating current by the computer in the generator before being supplied to the sockets. This is where the name "inverter" comes from. Since the power supply to the sockets is controlled by the computer, inverter generators offer a much lower distortion factor than standard generators. Distortion is an important factor in the power supply of sensitive devices such as smartphones, tablets, computers and televisions. These devices require "clean" power (power with a low THD value, such as the power from the wall socket) and can be damaged if they receive power with a high THD value.

- Advantages and disadvantages of petrol and diesel generators -

In petrol-powered engines, fuel and air are mixed together in the carburettor before compression. Although petrol is generally a more accessible fuel source, it is less economical than diesel. On the other hand, petrol increases the mobility of your generator, meaning you can take it from home to your boat or to the campsite for a weekend trip. Modern petrol generators require less maintenance and are usually cheaper than diesel generators. Fuel filters should be changed every 200 hours, while spark plugs should be replaced once a year.

Petrol generators are ideal for smaller needs and because these systems are generally much quieter than diesel-powered systems, you can use them in close quarters without causing too much disturbance.

A diesel genset is a less explosive option than a petrol generator. Diesel generators work by igniting the fuel through compression. The diesel and the air are supplied to the engine separately. Only the air is compressed, which means your engine runs more efficiently and uses less fuel.

Years ago, when most people thought about diesel generators, they knew they were noisy devices. Now, thanks to recent technological innovations, many diesel generators are so quiet, you can run them without causing too much disturbance to people around you. Since a diesel generator has neither a carburettor nor spark plugs, it requires less maintenance than its petrol-powered counterpart. If you need an extra push for more heavy-duty requirements, invest in a more powerful diesel generator. They perform significantly better with heavy loads than low ones since they are built to work under load for longer periods of time.

I ordered on Sunday and on Friday was already in my local post office in Finland. Super quick

Everything received in perfect conditions, as usual, and very fast.

Satisfied with the quality and speed of delivery )