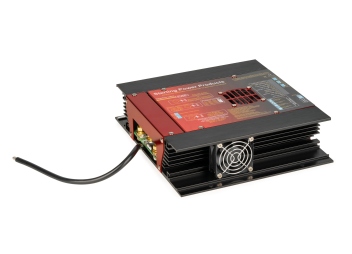 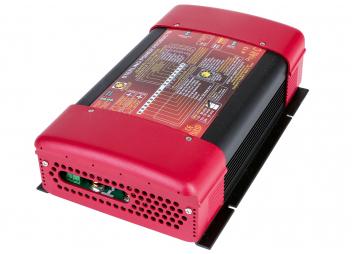 - What is an alternator to battery charger & how is it different from a high performance regulator? -

Alternator-to-battery chargers are also known as A2Bs. In on-board networks with starter and consumer batteries, an A2B is used to charge the service battery more efficiently and quickly. Unlike a high performance regulator, this device does not interfere directly with the alternator's field excitation, but instead puts a 'load' on the alternator, uses the energy forced from it and converts it into an optimised multi-stage IV characteristic curve to charge the service battery. It can be preset to characteristics for lead acid, AGM, gel or LiFePO4 batteries.

Installing alternator-to-battery chargers on board

Installing an A2B is extremely simple, as the unit replaces the existing isolating diode or battery switch. You only have to remove the connecting cables from the isolating diode or the battery selector switch and connect them directly to the terminals of the A2B and the short NEGATIVE connecting cable of the A2B to the alternator NEGATIVE. The three positive connecting wires may need to be fitted with additional fuses and if the A2B is intended to replace a 4-stage battery selector switch (1-2-1+2-OFF), additional isolators must be fitted in the POSITIVE wires to the batteries.

Using an additional "thin" measuring line (1x 1.5 mm²) between the consumer battery-POSITIVE and the A2B, line and terminal losses can be detected and compensated for by the A2B. An optional wired remote control unit is available to display and set alarms and operating values. On boats with two motors, both alternators can be connected in parallel to the A2B input. The service battery output can be used to charge other batteries (of the same type) via a downstream charge current distributor. Important when deciding which A2B to buy: The current carrying capacity (in the type designation) of the unit must be higher than the alternator nominal current.