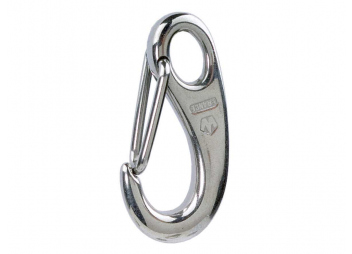 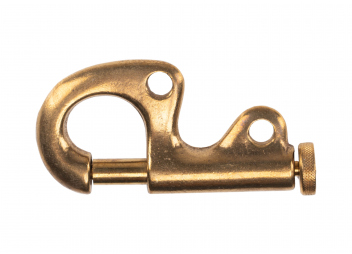 „Average satisfaction with this product“ 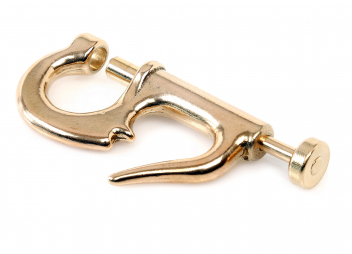 Carabiners are used in many ways in sailing. Whether simply attaching to buoys, when ascending your mast with a bosuns chair, for extra safety when climbing, or for securing people with a safety line on deck in heavy seas - they are one of a boater's most versatile pieces of equipment. Want to buy affordable carabiner hooks? In this short carabiner buying guide we help you make the right choice and tell you what you need to know about using them. We only supply top products from WASI, WICHARD and KONG in our shop. Learn more about Carabiners...

These handy metal clips are used in almost all water sport and leisure activities, but especially in sailing, mountaineering, climbing and paragliding. The strong snap hooks can be opened and closed quickly.

They consist of a metal loop with nose or keylock, spine and gate that can either be locking or non-locking. Carabiners are usually opened and closed via a spring-loaded snap gate mechanism to quickly attach and release lines and chains.

Marine grade snap hooks are typically made of stainless steel, because only high-quality steel provides sufficient protection against corrosion. High-grade locking and non-locking carabiner hooks are part of the personal protective equipment (PPE) in recreational boating: crew members use these reliable metal hooks to secure their lifebelts or safety harnesses to life jackets. Any metal carabiner clip that is sold in Europe as part of the PPE on a boat must be certified and approved to DIN standards.

- Many types of carabiner, each with different advantages and disadvantages -

Non-load bearing carabiners can be found in all kinds of wonderful shapes and sizes. As the name suggests, they should not be used to carry loads, and, not being certified, they must never be used as PPE. Most of them are used as ornaments (such as a carabiner ring on the zip of a rucksack), or as key rings.

But the fact that they do not lock automatically can actually be an advantage - provided the locking mechanism is not closed, a manual locking carabiner can be used like a normal snap hook carabiner. To lock a screwgate carabiner, you first have to close the gate, then screw the barrel up the thread to lock the gate.

The disadvantage of this type of locking carabiner is that vibrations can cause the screwgate to loosen and come open. Auto-locking carabiners (safelock carabiners) have a spring mechanism that locks the gate automatically as soon as you release it.

The nose design of a carabiner is extremely important for its strength, since the breaking load of a carabiner with the gate open is less than half than when the gate is fully closed. Manufacturers have come up with two main types of nose design that are found on many of today's caribiners. Most have a hooked nose that the gate snaps into. Newer normal carabiners predominantly feature a keylock system, whereby the nose is shaped like a 'T' and the end of the gate is shaped to fit precisely into it.

In addition to solid gate carabiners, there are also snap hook carabiners with wire gates. There are three important advantages to these kinds of carabiner: wire gates freeze up much less in extreme conditions; the thinner material makes the carabiner lighter, which is important in climbing (but not exclusively in that sport); and the lighter gate also reduces the so-called whiplash effect (more about this later in the notes on safety).

A disadvantage of wire gate sail snaps is that they usually have a hooked nose design with a notch on which webbing, lines or wire can snag and prevent the carabiner from closing properly.

A vast array of materials and shapes

There's a massive range of carabiners on the market! Some with screw locks, scissor carabiners, spring-loaded auto-locking carabiners, some made of stainless steel, aluminium, brass or even nylon for attaching rubber ropes, swivel carabiners, and also those with a rectangular eye for straps and snap shackles that can even be opened under load (important for water skiing).

However, all these different types of carabiner can be divided into three main shapes: D-shaped, oval shaped and pear or HMS-shaped.

Most carabiners are D-shaped. This design causes the rope or harness to slide straight onto the spine of the carabiner, thus keeping it well away from the snap gate and preventing accidental unclipping. The spine is also the part of the carabiner that bears the brunt of the load, and is the strongest axis.

The shape of an HMS carabiner is characterised by two main features: A very large gate opening and wide, smooth radius provides plenty of space at the top for knots of all kinds. These carabiners are pear shaped and used for belaying with half clove hitches (in German, HMS stands for "Halbmastwurfsicherung", or "half clove hitch belay") and for most belay devices.

The oval shape is used for very special applications, for example climbing or hoisting. The symmetrical shape causes equal loading on the gate and spine sides of the carabiner.

Which size is right?

- Pay attention to the breaking and working load -

A carabiner will only be as strong as the quality of its material and shape allows. The size and thickness of material must meet requirements and include a sufficient safety reserve. Choosing the right product is important, especially in sailing.

But what about standards regarding material thickness? Manufacturers must adhere to the respective applicable European standards 12275 or 362 for mountaineering and climbing. These standards can also be used as a guideline for sailing, especially if the carabiners are part of the PPE on board. On our partner KONG's website you will find details of the applicable EN (European Standards/Directives).

A quick look at the back of the carabiner will tell you whether it conforms to standards (i.e. has CE certification) and what maximum load it can withstand. The minimum values for carabiners in mountaineering, for example, are at least 20 kN when closed in the longitudinal direction, 7 kN in the transverse direction and also 7 kN with the gate open.

One kilo of newtons is roughly equivalent to a weight of 100 kg. In the longitudinal direction, certified products therefore will carry two tonnes of weight. As long as no person is to be held by the carabiner, in recreational boating, individuals themselves can decide the tolerance level in which they wish to operate.

Salt water is the bane of the carabiner - it attacks the material, leading to corrosion. Therefore, a carabiner that has come into contact with salt water should be carefully rinsed with clean water. You might also want to grease the locking mechanism with acid-free oil afterwards.

Avoid cross-loading! If the transverse axis is loaded, it has less than half the breaking strength - even if the gate is closed. To prevent cross-loading, some models have an internal positioning element for the tie-in point. This prevents slipping and ensures the maximum strength.

The so-called whiplash effect occurs when the spine of the carabiner, i.e. the side facing away from the gate, hits a surface hard. The inertia causes the gate to open briefly. You can easily simulate the whiplash effect yourself by hitting the back of a normal carabiner on the edge of a table. You won't be able to see the gate opening but you can clearly hear it.

The split second when the carabiner opens can be potentially dangerous. If loaded at the exact same time as it opens, the carabiner will have less than half the strength as when it is closed. High forces can cause the material to deform, and in some cases, if the applied force is very large, it can lead to a breakage.

Other useful tools on board: ropes, shackles and padeyes.

Check out our rigging section for lots of additional equipment. You might also be interested in our range of padeyes and shackles from Wichard and KONG.