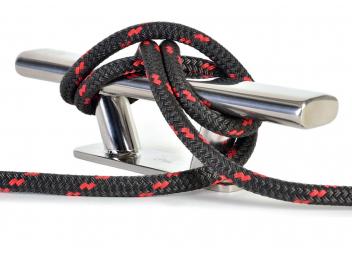 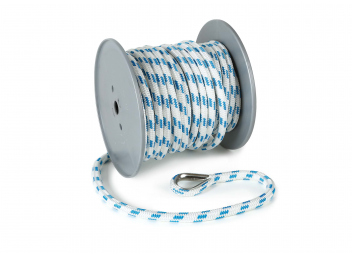 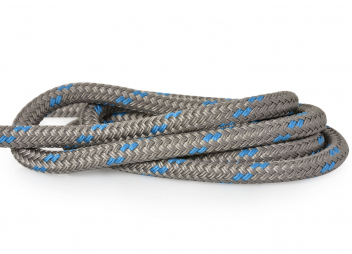 Total reliability - your anchor rode has to give you 100%, always! Using the proper rode will keep your boat and crew safe while anchoring, especially in high winds and swell. The right equipment for your anchoring system includes not only the right anchor or anchor chain, but also the anchor line. Want to buy high-quality anchor rode? Then you've come to the right place! Learn more about Anchor Lines...

What is an anchor line for boats?

- Choosing the right material is a matter of safety -

On smaller vessels, unlike larger boats, it's much more common to find anchor rode that is a combination of anchor with rope and chain at the anchor end. All-rope rodes without any chain are usually only used for secondary or stern anchors, or other temporary anchoring in calm conditions. Because they are lightweight, inexpensive and easier to stow, they are frequently used on smaller yachts and sailing boats and may not have a chain forerunner. All-rope anchor rodes will be longer than all-chain rode and therefore require more space, but the weight of a chain can add extra pounds in the bow and have a negative effect on your boat's performance.

Anchor lines are now primarily made of polyester, which has a high breaking and working load. It is relatively stretch-free, but has enough elasticity to prevent "jerking" - load peaks that act on the boat and anchor in wind and swell are thus well absorbed. The energy absorption or dampening on the line reduces damage to the hardware on the deck and prevents the anchor from being pulled free from the bottom. Adding a thimble spliced to the end of the line, to which a shackle can be attached is particularly important. This reduces chafe and spreads the load on the line. Splicing does little in terms of reducing breaking load, whereas a knot reduces it by up to 75%. TImbles made of stainless steel are best at preventing chafing where the shackle connects to the anchor or chain forerunner.

Some manufacturers now offer an environmentally friendly lead anchor line, which is made of double-braided polyester and has a lead insert on the first ten metres (or more) before the anchor. The added weight of the lead insert makes it easier to drag the anchor horizontally and embed. A disadvantage of anchor rope is that it takes up more space than chain. It also does not self-feed into the anchor locker. In this case, three-stranded twisted rope is better than braided, as it does not kink and is easier to coil and uncoil. Mooring lines do not make good anchor lines because they usually have too much stretch.

How thick should my anchor rope be?

The size of your boat is detrimental to how much and how thick your anchor line should be.

Choosing the right anchor equipment for your type of boat is crucial and it must be able to withstand the forces exerted by current, wind and waves. But handling is also an important factor. The thickness of an anchor line should be at least twelve millimetres for a boat of 1.5 t weight. However, even for smaller boats, lines at least 10 mm thick are preferable because they are easier to grip than thinner ones. The diameter should be 14 mm for a weight of four tonnes, and 16 mm for a weight of ten tonnes, according to experts.

How much anchor rope do I need?

A chain forerunner of three to six metres in length is recommended for a boat weighing 1.5 t. The weight of the chain at the end of the line pulls down on the anchor shaft, which increases the friction on the seabed and thus the effectiveness of the anchor. Generally speaking, the longer the anchor chain or anchor line, the better the anchor will hold. When using an anchor line, it is important to note that the swinging circle will be larger than with a chain. Anchoring in tidal waters presents a unique challenge: on the one hand, sufficient length should be available at high tide, while on the other hand, the larger swing circle at low tide must be considered.

How do I attach an anchor line on board?

The connection must hold well!

A swivelling shackle reliably secures an anchor line to the anchor, preventing it from twisting. Under deck, always shackle a line to the chain. Don't use a sailor's knot like an anchor bend - the knot won't hold reliably in the smooth, synthetic rope. The anchor and its connection must hold reliably and prevent damage to your boat, especially in emergency situations, such as if your are pressed onto the lee shore by onshore winds with engine damage in a storm.

You can find other relevant products such as anchor chains or pre-spliced mooring ropes in our Rigging and Anchoring & Mooring sections. More helpful information is in our mooring guide and anchors and anchor chain guide.